Ricardo Flores’ running career started about two years ago when a homeless shelter in St. Paul, Minnesota by the name of the Listening House offered an incentive program for being a part of their running club known as Next Steps.

By attending the club twice a week and participating 24 times, they would cover his cell phone bill for the next month, which gave Flores the chance to talk to his family who still live in Mexico. Unexpectedly, he found a passion for running and is now a regular member of the club. He participates in at least one race every month and on his second attempt at a full marathon, he finished in 3:22:54. 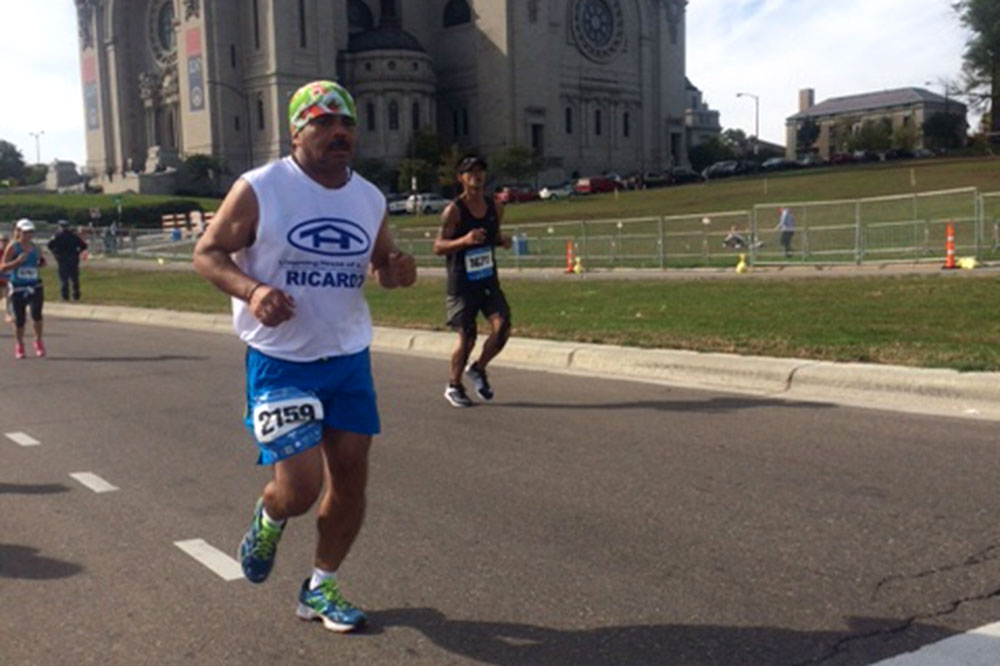 “I am so happy I did my best in the Twin Cities Marathon and did 20 minutes faster than my previous marathon,” Flores wrote in an email to Runner’s World. “I am looking forward to my next marathon at Grandma’s in Duluth next spring. Hopefully I can qualify for Boston there because I will train more and only have to improve eight minutes.”

Flores, who moved to the U.S. from Mexico in 2004, said he ran during his childhood but didn’t start running consistently until 2013. Because of substance abuse with alcohol and being unable to find consistent work, Flores has been on the streets for more than two years. For money, he picks up various handyman jobs whenever he can and volunteers at the Listening House.

Being a member of the running club has given Flores the opportunity to earn things like bus fares, donated running gear, race fees, or funds to pay for a cell phone.

“Our goal for the group is not to have successful runners,” said Julie Borgerding, a program director at the Listening House, who added that about 20 people have participated since the group was created in 2012. “It’s more about [helping our members] learn to show up, participate in a group, build self-esteem, and a variety of things that homelessness detracts. Ricardo has definitely been our biggest success.”

Along with other events that help support its homeless initiatives, the Listening House puts on a race, the Next Steps 5K, as a fundraiser to cover the costs of the incentives. Flores won this year’s race held in May, finishing in 20:12.

Borgerding said Flores is drawn to the community aspect of the sport, the competition, and how the activity has made him a stronger, happier person.