According to the World Health Organization, girls suffer from anxiety and depression twice as often as boys. However, several non-profit organizations are offering a way for girls to run, which will help them connect better with themselves, and teach things like confidence, steady breathing, and self-discipline.

Title IX Girls was founded by Stacy Rodriguez-Rennard in 2007. She is a mental health clinician who is also a passionate runner. “Girls between 9 and 15 are in a very precarious stage of development,” she says, “They’re operating from a very emotional and not-so-rational place.” 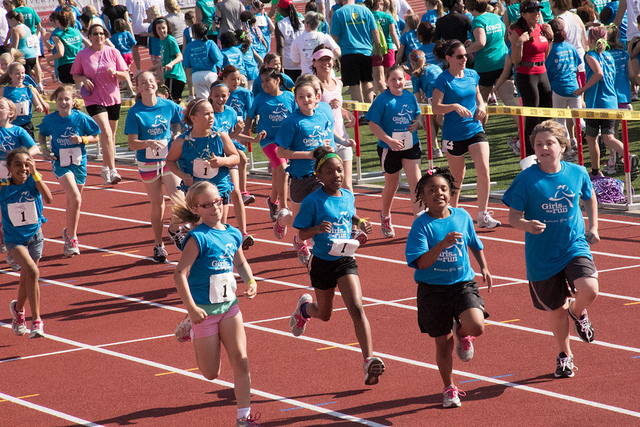 Another organization which has been working with young girls for nearly 20 years is Girls on the Run. It was founded in Charlotte, NC with just 13 girls. It currently has over 160,000 girls in 218 chapters across the United States, and they are expecting to serve their millionth girl by next year.

“We like running because anybody can do it,” Britt says. “We like the simplicity of running. We like that we can do it as a group. We like that it’s simple to set a goal and achieve a goal within the timetable we have.”

There have been few times when girls have needed such support as much as now, says Lyn Mikel Brown, a professor of education at Colby College who studies that time of life.

“There are all kinds of stresses they’re confronting. They’re being pressed to kind of disconnect from themselves and to line up with the ideals of how girls should be, how they should look, what they should wear,” Brown says.

Running, she says, “gives girls these opportunities to come together and process this stuff, and have it paired with an activity that gives them a sense of embodiment and strength and power—to focus and settle into themselves.”

But many girls these days get less, and not more, of this in adolescence.

Only one in four girls exercises regularly by her senior year of high school, according to the Centers for Disease Control. By the time they’re 14, twice as many girls drop out of sports as boys, the Women’s Sports Foundation found. One reason, it says, is that there are 1.3 million fewer opportunities to play, because of an imbalance in the number of boys’ and girls’ teams. By grades 9 through 12, fewer than 30 percent of girls consider sports a big part of their lives, compared to more than half of boys, the Sports and Fitness Industry Association reports.